NEW YEAR 2007 LITTER Sire: Ch Hosanna's Garnet and Dam: Hosanna Perfect Peace ~ Whelped January 5, 2007
This litter is full siblings to Am/Can Champion Hosanna's Bold Lioness ('Cat') ~ a multiple Champion PRODUCER,
CH Hosanna Sow The Wind ('Gale') ~ A Champion PRODUCER,
and CH Hosanna Reap The Whirlwind ('Reaper'), who has not yet been tried for breeding.
Click HERE to see Cat     Their Litter Page - THREE Champions in this litter!
Precious came back to us clipped down a couple of years ago, when her first owner had health problems.  We grew her coat, and
let her try showing, which she LOVES.  She now needs just her majors to finish her Championship. Beau had 9 Champion points when he went to live with Keely, in MI a few years ago. 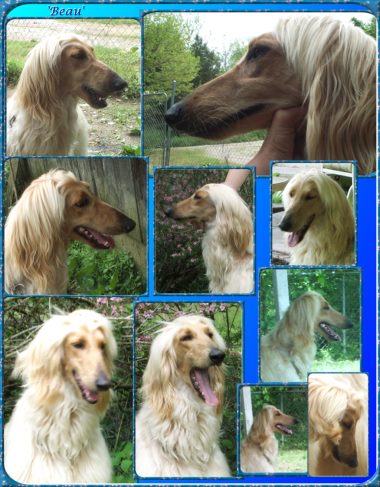 Monk had a couple of Champion points, but now lives in Augusta, Maine, and enjoyes a couch.